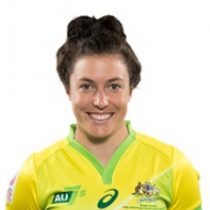 Emilee Cherry lifted to her game to another level after Tim Walsh took over as Head Coach in September 2013. The perfectly balanced centre counts rugby league legend Darren Lockyer - also from Roma - as her sporting hero. When Cherry took to the field at the Rio 2016 Olympics, she was the first athlete from Roma to compete at the Games since 1948.

The 23-year-old scored the most tries in the series (33), scored the most points (195) and was the stand-out player during the 2013-14 IRB World Series season and was duly named the 2014 World Sevens Player of the Year. A standout of Australia's Gold Medal campaign at the Rio Olympic Games, Cherry scored a crucial first half double in the semi final victory over Canada at the Rio Olympics in August 2016.

Leading into the 2017/18 circuit on a high note, Cherry was a part of the victorious University of Queensland side that had a clean sweep during the 2017 Aon University Sevens Series, coming first in every leg of the tour. Emily is looking to further advance her total career points 649 leading into the first leg of the World Series Circuit in Dubai at the beginning of December after already adding an additional three tries and two conversions during the Oceania Sevens tournament in November where the squad came second to New Zealand in the final.