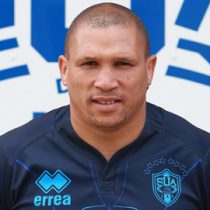 Having represented South Africa U20s Enrico "Ricky Januarie started his illustrious career at Boland Cavaliers in 2002 and was snapped up by the Lions the following year.

A combative and abrasive halfback Januarie made over 30 appearances for the Cats in Super Rugby and was called into the Springbok squad for the first time in 2005 ahead of the June internationals.
He made his Test debut during the June Internationals against Uruguay in East London at the age of 23. Later that year he once again named in the Springbok squad for the Tri-Nations and the November Tests.

He became a regular in the Springbok squad and in 2008 he left the Lions and joined the Stormers.

The nuggety scrumhalf wrote himself into Springbok lore when he scored the match-winning try in Dunedin in July 2008 to give the Springboks their first-ever win at Dunedin and the first over the All Blacks in New Zealand in a decade.

The following year he went on a short loan to Ospreys and he returned for the 2009 Super Rugby season.

He continued to be regular int he Stormers and Springbok squad up until 2011 when he retired from Test rugby prior to the Rugby World Cup. He played his last Test match for South Africa against All Blacks in Soweto at the age of 28.

Following his retirement from Test rugby we moved to France joining Lyon.

He spent 4 years at Lyon making over 30 appearances for the side before joining La Rochelle.

La Rochelle headed into the Top 14 playoffs as the top team in the competition, with Januarie playing key role in his sides successful season.

In June 2017 the 47-test cap Springbok signed for newly promoted Top 14 side Agen.