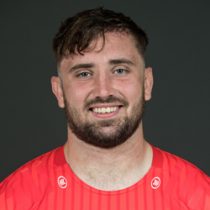 A Dubliner Eoghan Clarke joined the Academy in the summer of 2018. The promising hooker started his rugby career at Seapoint RFC and played schools rugby with CBC Monkstown.

He has represented Leinster at underage level and played in the 2018 6 Nations and World Championship with the Ireland U20s. Clarke made three appearances for Munster A in the 2019 Celtic Cup.

In November 2019, he was named in Munster's Champions Cup squad. As of June 2020, he is yet to make his Munster senior debut.