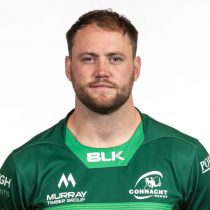 A former student of Colaiste Organic, one of the shining stars of Connacht's ever-improving academy, McKeon has become one of the countries brightest back rows. His impressive performances for Connacht’s under 20 side were gaining rave reviews and he was eventually given his Connacht debut against Scarlets in 2010.

Since then, McKeon has improved with each passing game and was part of the Connacht side which defeated Samoa in 2010. He also played a part in Connacht’s maiden Heineken Cup campaign. After becoming a vital senior member of the Connacht squad, the versatile back rower was named in the Irish Wolfhounds team that would take on the English Saxons in January 2015.

The Galwegian has spent nine seasons as part of the senior ranks in the Sportsground, and after winning his first piece of professional silverware when they claimed the Pro12 title. McKeon suffered two big injuries last season: a Grade 3 ligament tear in his elbow, and a hip-pointer problem kept him out of action for an extended period.

The versatile back-row played 14 times for Connacht in 2016-17, and his solitary try came in their 32-11 defeat against Ospreys in Round 2 of the Pro12 at the Sportsground.

In April 2017, Connacht announced that McKeon had signed on with the club for the 2017/18 season and beyond.

After 127 appearances for Connacht, McKeon was handed a new deal with the club.