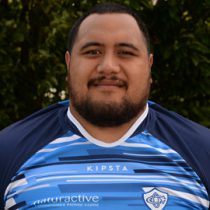 Sione is a former St. Pat's Town First XV captain and Hurricanes U18 star out of the powerful Northern United club near Wellington. In June 2012 he was part of the New Zealand U20 side that contested the IRB Junior Wolrd Championship in South Africa, playing off the bench in the final against the hosts.

Part Wellington’s Training Squad at the start of the 2012 ITM Cup, Sione was promoted to the full squad following injuries and grabbed his chances. He made his ITM Cup debut off the bench against defending champions Canterbury in Christchurch and a week later played his first starting game at home at Westpac Stadium against Waikato.

The following year Sione was called into the Hurricanes Super Rugby squad and had two successful seasons with the club before taking up an opportunity to join French Top 14 club Castres.

Sione joins newly promoted Top14 side Perpignan ahead of the 2018/19 season.