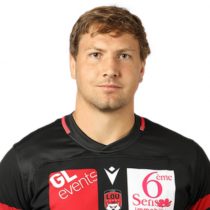 Oosthuizen played his junior rugby for the Leopards, representing the province at Under 16 and Under 18 level, before moving to the Lions where he made his Super Rugby debut as a 20-year-old.

The following season was spent in Australia with the Brumbies, before returning home to South Africa and signing a contract with the Sharks.

As of the beginning of the 2017 Super Rugby season, he has made 45 appearances since his debut 2012 against the Cheetahs.

In May 2017, Oosthuizen signed a three-year deal with French side Lyon.