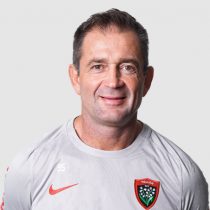 Franck Azema formerly played in the centres in the French league and enjoyed spells at Perpignan, Montpellier, Clermont and Narbonne.

After calling time on his career in 2001, he went into coaching and started at Ceret Athletic. He then linked up with Perpignan in 2004 as their academy coach. Two years later, under Jacques Brunel, Azema moved up to work with the first team and helped lead them to the Top 14 title in 2009.

Following a successful spell, he joined Clermont ahead of the 2010-11 season and impressed to the extent the Top 14 sides ignored a number of top international coaches to appoint Azema as their head coach for the 2014-15 season.

Returning to his roots, Azema played for the club between 1996 and 2000 and during his playing career, notably winning the European Challenge in 1999 alongside Jean-Marc Lhermet.

In February of 2021, Azema announced that he would be stepping down from the Clermont head coaching role at the conclusion of the 2020-21 season with rumours circulating that he would be taking the reins at Montpellier thereafter.