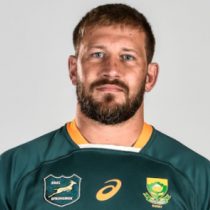 A schoolboy prodigy, Frans Steyn was tipped for great things on the rugby pitch during his time at Grey Kollege in Bloemfontein.

Steyn quickly made his mark at professional level bursting onto the scene during the 2006 Currie Cup with the Sharks.

After playing only ten matches for the Sharks in the 2006 Currie Cup, Steyn, at the age of 19 years old, was called into the Springbok squad for the Northern Hemisphere tour.

He debuted at wing against Ireland and scored a try on his debut. In his next international match, he was moved to fullback against England, scoring a long-range drop-goal, from his own half.

In 2007, he helped the Sharks reach the final of Super Rugby where they were beaten by the Bulls. Once again, he was included in the Springboks squad for the Tri Nations - where he shone.

He kicked two drop goals in the 2007 Tri-Nations opener against Australia at Newlands Stadium in Cape Town, to win the game for the Springboks. One of these, a 42-metre effort from a fielded clearance kick next to the sideline, and another three minutes from time next to the posts about 30 metres out.

He was retained in the squad for the Rugby World Cup in France and slotted into the starting lineup at centre following an injury to Jean de Villiers which ruled him out of the World Cup.

He featured in all seven RWC matches in the Springboks winning campaign in 2007 including the final where he started at inside centre. At age 20, he was the youngest player to appear for the Springboks in their victorious RWC 2007 campaign. He kicked a penalty in the 2007 RWC final against England, accounting for three of his 17 points in the tournament.

He went on to feature for the Springboks during the British and Irish Lions tour in 2009 starting the first two tests at fullback as the Boks claimed a 2-1 Series win.

He went on to make 75 Super Rugby appearances with the Sharks in his 5 seasons for the Franchise which saw him spend 3 years at the then Racing Metro from 2009-2012. After leaving the Sharks in 2014 to play in Japan for the Brave Lupus he made his way back to France where he played under Jake White at Montpellier.

He became the youngest South Africa player to reach the milestone of 50 caps against Argentina in 2012. That record was later beaten by Pat Lambie (2015) and Eben Etzebeth (2016).

Returned to play for the Springboks in 2017, after not having featured in a single test match for them in nearly five years. He made appearances off the bench for the Boks during the series but did not feature for his country again in 2017.

In April 2018 he signed a new 2-year deal with Montpellier. Has the reputation of a fearsome drop goal kicker. There is online footage of him seemingly effortless nailing drop goals from deep in his own territory

He was recalled to the Springboks squad for the 2019 Rugby Championship helping the side win the competition and cemented his spot in the Rugby World Cup squad, his third tournament.

He scored a try against Canada and was part of the popular 'Bomb Squad' which helped secure the Springboks' third Rugby World Cup title.

In April 2020, he traded Montpellier for Cheetahs after signing a two-year deal with the Bloemfontein-based side.

Steyn enters the test matches against Georgia and the British & Irish Lions in 2021 with 67 test caps, 141 points, 7 conversions, 21 penalties and 3 drop goals.

He has the opportunity to become the first player to ever win two British and Irish Lions Tours and two Rugby World Cups.