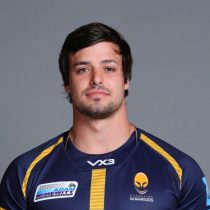 Bloemfontein-born Venter was a member of the South African U20 team that competed in the 2010 and 2011 Junior World Championships.

Venter made 11 Super Rugby appearances for the Bulls and played 43 times for provincial side the Blue Bulls before making the switch to the Cheetahs in 2014, where he was appointed as captain just two years later.

During his four years at the Toyota Stadium, Venter has made 83 appearances for the Cheetahs, racking up 15 tries. He has also featured 29 times for the Free State Cheetahs in the Currie Cup, scoring five tries and helping them to the title in 2016.

In 2016, Venter was included in the Springbok end of the year Europe tour. He made his Springbok debut on 12 Nov 2016 against England.

Venter played his 50th SuperRugby match on the 21 April 2017 against the Crusaders.

Made his Guinness PRO14 debut against Munster on the 9 September 2017 and played in 10 matches so far.

In February 2018, Worcester Warriors confirmed the Springbok centre will be joining the Club on a two-year deal from Guinness Pro 14 side the Cheetahs this summer.

Venter made his 29th Warriors appearance in late November, scoring ten tries in his two season’s with the club before he signed a new two-year-deal for the club.