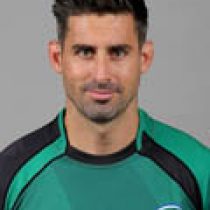 At the beginning of the 2008-09 season, Connacht announced the signing of former Munster and Leicester Tigers scrum half Frank Murphy. Murphy came through the academy system at Munster, where he made his senior debut in 2001. Murphy, who had Peter Stringer ahead of him in the Munster pecking order, decided to join Leicester Tigers in 2006 in search of more regular rugby. His debut season in the English midlands was an exciting one, Murphy appeared in both the 2007 Heineken Cup and Premiership finals. Murphy’s experience, particularly in big games, appealed to Connacht who signed the Corkman in 2008. Murphy has been a calm and composed influence on Connacht’s backline since his move to the Sportsground. Murphy has also represented the Irish Wolfhounds.