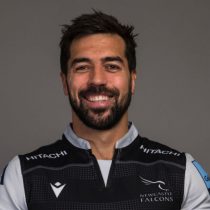 Born in Bridgend, Owen started his domestic club rugby with Maesteg RFC where he played alongside several greats such as Alan Bateman, Kevin Ellis and Jonathan Davies.

In June 2007 he gained a development contract with the Ospreys region for the 2007–2008 season after impressing in the U19 IRB World Championships. Owen earned a Wales U19 squad call up ahead of the spring internationals in February 2007, and made a replacement appearance in the victory over the Irish and scored an injury time try against France.

In November 2007 Owen received a call-up to the Wales Sevens squad ahead of the initial legs of the 2007–2008 IRB Sevens World Series.

In June 2017, Owen was released from his contract with Scarlets to join up with Leicester Tigers.

Owen joined the Scarlets in the summer of 2012 and has made 75 appearances for the region, scoring six tries.

Tough competition in the backline at the Scarlets kept Owen’s appearances tally to nine in 2016-17, which included a European Rugby Champions Cup appearance against former champions Toulon.


In May 2019, he signed a two-year deal with Newcastle Falcons.