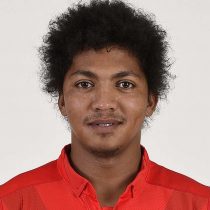 The Cape Town-born April earned his first provincial call-up in 2007, when he represented Boland in the Under-16 Grant Khomo Week competition.

After moving to Gauteng in 2009, he was included in the Golden Lions U19 squad for the 2009 Under-19 Provincial Championship.

2012 saw him being included in the Golden Lions' squad for the 2012 Vodacom Cup where he made his first class debut in their match against the Leopards in Potchefstroom.

April wasn't retained by the Golden Lions after 2012 and he returned to the Western Cape to join the team he represented at youth level, the Boland Cavaliers. He made four appearances for them during the 2013 Vodacom Cup competition, scoring four points, and twice during the 2014 Vodacom Cup competition. However, a serious knee injury decreased his progress at Boland and he was released at the end of 2014.

The 24-year-old then joined Western Province amateur club side Durbanville-Bellville, who finished fourth in the Western Province Super League A and won through a series of play-offs to qualify for the 2015 SARU Community Cup. He played in all seven of their matches during the competition and helped his side all the way to the final, despite being the last team to qualify.

April's contributions proved decisive in the final against hosts and defending champions Rustenburg Impala, scoring Durbanville-Bellville's opening try of the match and kicking two conversions and two penalties for a personal haul of 15 points in their 31–30 victory, to secure the title for his side for the first time. After the competition, April was also named as the Young Player of the Tournament.

In April 2015, it was announced that April signed a two-year contract with Durban-based side the Sharks.

He made one appearance for the Sharks during the 2018 Super Rugby season before signing a deal NTT Shining Arcs.