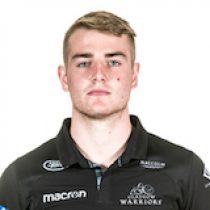 Lowe joined Glasgow's training group ahead of the 2019/2020 season.

He was previously part of the EDP group aligned to Glasgow Warriors.

Having made his debut for Scotland at the 2014 Dubai Sevens, Lowe has consistently impressed with his ability to create opportunities for his team-mates, as well as providing a clinical edge himself.

The man from Carluke was selected for the 2018 Sevens World Cup in San Francisco, where he helped the team to a seventh place finish in the final standings.