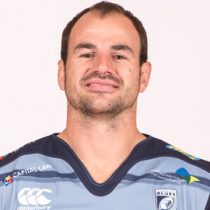 The former Super 15, South African lock joined the Scarlets for the 2012-13 season, being attracted to playing rugby in Wales because of the Welsh style of play and made his Scarlets debut in a pre-season friendly against Narbonne in August 2012.

After enjoying a successful first season with the Scarlets and receiving the Players’ Player of the Year accolade, the Durban born power house moved to the Cardiff Blues for the 16-17 season. He made his debut against Edinburgh in the Pro12 that season.

He heads into the 2018/19 season with 36 appearances for Cardiff and 5 points scored.