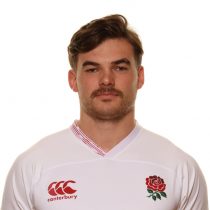 Furbank was part of Northampton Wanderers’ double triumph in the A League – but really grasped the bull by the horns when presented with first-team opportunities at Franklin’s Gardens.

Born in Huntingdon, Furbank burst into the spotlight in 2018 and was rewarded with his first senior Saints contract the following summer.

After starting off at hometown club Huntingdon RFC, the fullback sharpened his skills at Bedford School and joined the Senior Academy in 2015.

Furbank lifted the Premiership Rugby U18s League trophy before becoming Saint #1986 in November 2017, adding a debut try to his record as he faced Exeter Chiefs in the Anglo-Welsh Cup.

He then broke into Northampton’s senior side during the 2018/19 campaign, making 18 appearances that season and claiming the Club’s Player of the Month award for February.

In December 2018, Furbank committed his future to Northampton Saints by signing a new deal that will see him remain at Franklin’s Gardens until 2021.

He also started the side’s European Challenge Cup quarter-final outing in Clermont Auvergne, and Saints’ Premiership Rugby Cup final victory in 2019, helping the side claim a first piece of silverware in five seasons.

He went into the 2019/20 Champions Cup season with 3 European caps and earned a call up by Eddie Jones ahead of the 2020 Six Nations.