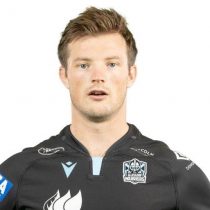 George Horne, a product of Howe of Fife club, represented his region, Caledonia, at all age-grade levels.

He played a huge role in Scotland under-20's memorable 36-34 defeat of their Welsh counterparts in the 2015 Six Nations Championship.

Horne was then selected for the World Rugby Under-20 Championship and appeared in all five games, starting against in the pool stages game against Ireland.

He is brother of Scotland and Glasgow Warriors centre, Peter, and is son of Howe of Fife 1XV coach, Garry. His mum, Hazel, is a tennis coach.

In April 2017, Horne signed a professional contract with Glasgow Warriors, having played for Glasgow Hawks in the Scottish Premiership.

The half-back is a reliable placekicker and despite his modest frame, he is a terrier in the tackle.

In February 2018, the scrum-half extended his contract at Glasgow until May 2019.

The scrum-half was the club’s top try-scorer during the 2017/18 season, his first season as a professional, and was named Player and Young Player of the Season at the end of year awards dinner.

In December 2018, he signed a new contract at Glasgow Warriors, committing to the club until at least 2021.

As of September 2019, Horne had represented Scotland on 10 occasions and scored 32 points.

He has made 46 appearances for Glasgow and has scored 24 tries as of December 2019.