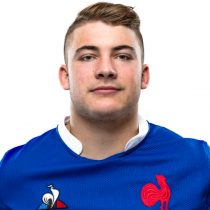 As an 18-year-old Gervais Cordin shot into the spotlight when he scored a sensational try against Mont-de-Marsan in the PROD2 in 2018.

With the ability to comfortably play fullback and wing Cordin continued to produce on his exceptional promise.

His professional game in the PRO D2 came as an 18-year-old for Grenoble after playing with the Crabos and the Espoirs during the 2016/17 last season.

He went on to represent France u20s during the 2018 U20 World Championship, helping the side to their maiden title in the competition.

His 2018/19 season was hammered by a serious knee injury which didn't stop Toulon from signing the youngster on a three-year deal with the club.

He starred in the early stages of the 2019/20 season featuring in all of Toulon's 13 games in the TOP14 and scored his first try for the club against Castres in January.

His form with the club led to him earning a call up to the France senior for both the 2019 & 2020 Six Nations.

Still yet to make his debut, Cordin was included in the France squad for the last tests in 2020.