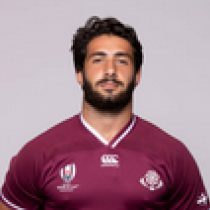 A gifted centre, Giorgi Kveseladze started his rugby playing for Armazi Marneuli in Georgian Didi 10 competition and went on to represent the Georgia national U20 team in 2016 and 2017.

His test debut for the senior national team came in 2017 and he went on to represent Georgia in the Rugby World Cup in 2019.

Altough he broke into the Georgian test team at an early age, Kveseladze wasn't expected to be a regular in the starting XV for his country however a blockbuster 2020 may have just changed those views.

An outstanding 2020 saw him standout during the Autumn Nations Cup with his powerful ball carries and excellent all round skills standing out.

The abrasive centre, put in a number of impressive performances across the international campaign, including a remarkable solo try against Ireland.

His performance caught the eye on European clubs as he signed with Glouster in December 2020. In doing so he became just the second Georgian back to sign for a Premiership club.