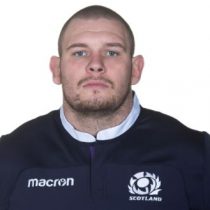 Reid is a fierce competitor who came off the bench to make his club debut against Ospreys on 5 March 2011, put pen to paper on a two-year deal and provided such competition to the likes of Ryan Grant, Jon Welsh and Ed Kalman, to the extent that he was rewarded with a two-year contract extension in early 2012.

His fine club form in season 2012/13 saw him involved with the Scotland squad during the EMC Tests in November.

However he had to wait until 2014 to make his debut when he lined out against USA in the Summer internationals. Reid was named in the Scottish squad for the Six Nations Championship in 2015.

He made his 6 Nations debut in the 2015 Championship against France in Paris before a knee injury against Wales, in the following round, brought an end to his campaign.

A key figure in Glasgow Warriors' PRO12 title success having come through the Ayr set-up, Reid returned to the Scotland fold in all four of the 2015 Summer Test matches, starting in the away win over Italy in Torino.

His performances earned him a place in the 31-man Scotland squad for Rugby World Cup 2015, in which he made three appearances.

In January 2017, he was included in Scotland's squad to compete in the 2017 Six Nations tournament, having played in 4 Six Nation matches previously.

It was confirmed in February 2017 that Reid was one of three players to be released by the Glasgow Warriors at the end of the 2016/17 season after 109 appearances for the club.

In May 2017, he was named in the Scotland squad for the three-Test summer tour, adding to his 24 caps.

May 2019 saw him being named in Scotland's 42-man training squad ahead of the Rugby World Cup with 37 international caps to his name.

On 29 November 2019 it was announced that in addition to playing for the Ayrshire Bulls, Reid would once again joined Glasgow Warriors in a partnership contract between the Pro14 and Super 6 side.

In March 2020 the Scotland international signed for Northampton Saints until the end of the 2019/20 Premiership season.