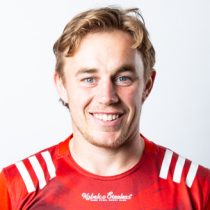 After a very successful ITM Cup with the Otago Razorback, Parker got his first opportunity to play in the Investec Super Rugby competition in 2013. A skilful flyhalf Parker is also adept from the kicking tee, with a kicking percentage over 80% in the 2012 ITM Cup. Parker added a real punch to the Highlanders backline, and his running game keeps opposition defences guessing all season long.

Parker has scored 103 points in his 30 appearances for the Highlanders in Super Rugby and has been included in the 2017 Super Rugby season.

Parker made 8 appearances for the Highlanders in 2017 scoring 17 points and signed a deal with the Sunwolves for the 2018 Super Rugby season.

Parker starred for the Sunwolves until 2020 and built a reputation as one of the sharpest shooters in World Rugby with his accuracy from the tee.

At the end of his Sunwolves career, Parker had slotted 95% of his shots at goal with Opta calculating that the average Super Rugby goal kicker would have converted just 77% of Parker’s attempts at goal

Parker was the only player to have made more than 10 try assists for the Sunwolves (12), Parker also kicked a club-high 95 goals for the side including 71 goals from a stretch of 72 attempts from April 2018 to April 2019 and will go down in Super Rugby folklore for his efforts.

He was named as the best Sunwolves player of All Time by SANZAAR. Following the Sunwolves exit from Super Rugby, Parker continues to feature for Japanese Top League side Kobe Steeelers.