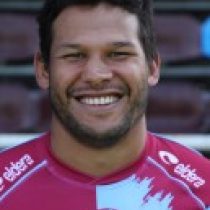 Veratau, who has also played for Northern Suburbs in Sydney’s Shute Shield competition, also played in Japan back in 2009 when he represented the Mitsubishi Heavy Industries side, Mitsubishi Sagamihira Dynaboars, based in Kanagawa.

In August 2018, the former Brumbies and Queensland Reds player signed for London Scottish from France where he was plying his trade with Bourgoin.