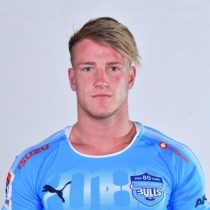 A powerful forward Hendre Stassen is adept at lock and on the side of the scrum.

Stassen attended Hoerskool Dr EG Jansen and was selected in the Valke u16 and u18 squads between 2013 and 2015.

He was a standout performer for Valke and despite still being in school he represented the Bulls u19s at the Under 19 Currie Cup Competition in 2015.

Stassen was named in the Springbok u20 squad for the 2017 U20 World Championship in Georgia where he featured mostly at lock.

The promising young forward has a bright future in SA Rugby and looked to make his mark during his debut Super Rugby season with the Bulls after being named in the Bulls squad for the 2018 season.