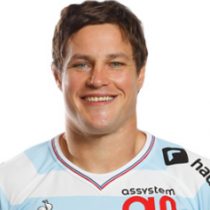 Joined the junior section of Racing 92 in 1999 as an 11-year-old and has remained a one-club man. His Racing 92 senior debut was in March 2008 in Pro-D2 he was promoted with them the following year into the Top-14.

During the 2008/2009 season, he played 20 games and become French Champion of Pro D2 with his team. He won Top-14 title with Racing playing centre in the final in Barcelona having played in the Champions Cup final defeat to Saracens a month earlier.

Chavancy represented France U20 in the 2008 Junior World Championships in Wales, scoring tries against Japan and Argentina. Played for France A in the 2010 Churchill Cup in the USA. Scoring a try vs Uruguay

And in June 2010 he was selected in the French team A for the Churchill Cup in the United-States. He has made six appearances for the French Barbarians, three against Japan in 2012, captain them against Namibia in 2014 and two on the tour to Argentina in 2015.

The French centre was called up to the Guy Noves squad for round 3 of the 2017 6 Nations championship, with his performances securing a spot in the squad for the 2018 Six Nations tournament.

Chavancy made only one appearance for France during the 2018 Six Nations taking his test cap tally to 4.