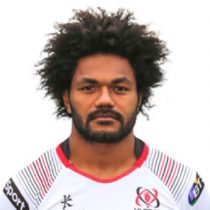 Since 2011 the Fijian Flyer has captivated audiences with his magical left-right steps, awesome fend and hard running style.

The flyer played four seasons for Waikato, making 34 appearances and scoring eight tries before linking up with the Brumbies.

More impressively, he continues to build on his already robust defensive game to prove that he is one of the most reliable players in all facets of the game.

As the top Australian conference try-scorer in 2012 and 2013 only injury halted his impressive Super Rugby form in the 2014 season.

Unfortunately due to visa ineligibility issues over Henry’s involvement in the ITM Cup, it was a long wait for his debut Green & Gold debut against Ireland. This finally changed in 2014 when he made his long-overdue international debut, notching 2 caps for the Wallabies during their Spring Tour. He missed the opening two rounds of The Rugby Championship in 2015, after serving a five-week ban, but was included in Cheika's RWC squad.

He is the son of Fijian politician Samisoni Tikoinasau and the grandson of former Fiji President, Ratu Josefa Iloilo.

An excitement machine and fan favourite, Speight became one of World Rugby’s most exciting players.

After a stint with the Australian Sevens team in 2016, Speight returned to his best form with the Brumbies, dominating in Super Rugby and earning the Brett Robinson Award for the Brumbies Player’s Player.

The then Brumbies star rejected offers from multiple clubs while on tour with the Wallabies in 2017, opting to remain with the Brumbies to fight for his spot on the plane to the Rugby World Cup in Japan 2019.

In August 2018, the Fijian-born speedster agreed to join Ulster on a short-term contract.

As of June 2020, Speight will call Ballymore home for the next two years after deciding to remain in Australian Rugby with the Reds.