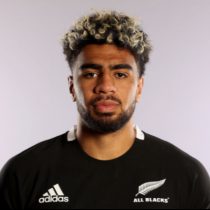 Son of former Auckland & Fijian back Waisake Sotutu, who was the vice-captain for Fiji at the 1999 World Cup, Hoskins is powerful loose forward who can play on the side of the scrum as well as no.8.

Sotutu represented New Zealand Schools and was a member of Auckland's winning Under-19 side and played for Auckland B before earning a call up to the Auckland Mitre 10 Cup squad for the final game of the season.

He was named in the New Zealand u20s squad for the 2018 World Under-20 Championship and following his inclusion in the squad he signed a two-year deal with the Blues for 2019 Super Rugby season onwards.

Hoskins made his debut for the Blues against the Crusaders in Christchurch in Round 15 of the 2019 season.

Having had a taste of Super Rugby in his rookie season, Hoskins took his opportunities in 2020 with both hands.

He displaced Akira Ioane in the Blues starting line up taking the #8 jersey and featured in six of the Blues seven Super Rugby matches.

His form in Super Rugby Aotearoa saw him earn a contract extension until 2022 after just 11 appearances for the side. His impressive form saw him catch the attention of the England coach Eddie Jones and Fiji coach Vern Cotter but Sotutu committed to representing New Zealand.

He started for the North in the North v South Island clash before he earned his maiden call up to the All Blacks squad. He made his test debut off the bench in the first Bledisloe Cup Test in 2020 in Wellington and took his test cap tally to four in his rookie test year.