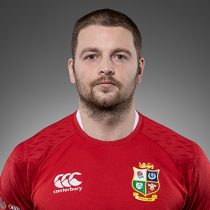 A supremely talented forward who can play in both the second and back rows, Henderson made his senior debut for Ulster in April 2012.

Henderson graduated from Belfast Royal Academy and was fast-tracked into the Ulster academy. Has represented Ireland's U19 and U20 sides as well as the Ireland Wolfhounds.
A key member of Ireland's successful U20 campaign in the 2012 Junior World Cup, Henderson's performances were taken note of and earned him a development contract with Ulster for the 2012-13 season.

Since being promoted to the Ulster first-team in 2013, Henderson shone for the Irish province, becoming one of the most physical and hard carrying forwards in the then Pro12 league. His high level of performance for the Irish province led to him being called up to the Irish national side, making his debut in a loss to South Africa in November 2012.

His eye-catching showings improved to such an extent that in 2015 he was selected in the final 31-man squad to represent Ireland at the 2015 World Cup, where he was expected to have a considerable influence. He played all four of Ireland's games at RWC 2015 scoring a try against Canada.

Henderson played at flank in eight of his first nine test matches, but has played as a second-row in most appearances
for Ireland since.

He travelled on the tour to South Africa in 2016, playing in all three tests, then appeared in two autumn internationals in Dublin; against the All Blacks and Australia, scoring a try in the latter game.

In April 2017, Henderson was included in the British & Irish Lions squad for the tour to New Zealand. In July 2019, he succeeded Rory Best as Ulster Rugby captain having represented his country at the Rugby World Cup in Japan.

In February 2021, Henderson signed a 2-year extension to his IRFU contract, keeping him at Ulster until 2023.

In May 2021, Henderson gained selection for the 2021 British & Irish Lions tour to South Africa.