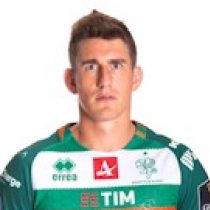 Equally at home at full back or fly half, the versatile Ian Keatley has done a fantastic job in plugging the gap left by Paul Warwick’s departure from Munster. After failing to win a full time Leinster contract, Keatley joined Connacht in 2008 where he became the Western Provinces top ever points scorer, scoring 688 points.

Keatley’s fine performances for Connacht alerted Munster who sealed his signature in 2011. He had a fine first season for Munster, adequately covering for the incumbent Ronan O’Gara when the IRFU’s player welfare scheme kicked in.

Keatley scored over 1000 points for the province in October 2016, surpassing the milestone against Zebre in Thomond Park, becoming just the second player ever to do so after Ronan O'Gara. Selected to tour North America in May 2009, playing in both tests against Canada and USA. Added a third cap off the bench against Georgia in 2014.

Play for Emerging Ireland in the Tbilisi Cup in 2013 and in the team that won the Nations Cup in Bucharest in 2014. He made his first appearance in the 6 Nations starting at No.10 against Italy in Rome, 2015, kicking 14 points.

Keatley was called into the Irish squad for the 2017 Six Nations, when first choice fly half Johnny Sexton was injured.

In May 2017, he signed a new two-year contract with Munster. In October the experienced out-half became the second Munster player ever to score over 1000 points, achieving the milestone against Zebre in Thomond Park.

Keatley went into the 2018 Six Nations tournament having been capped 7 times by Ireland.

Keatley joined Italian Pro14 side Benetton ahead of the 2019–20 season.

As of December 2019, he has made 5 appearances for the side and has scored 32 points.