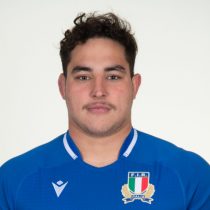 Nemer spent there years playing age-grade rugby for Argentina. He was an Argentine u18’s and u20’s player.

The prop is from Mar del Plata in Buenos Aires province. A product of Bigua Rugby Club, he has played rugby since the age of four. He also played for IPR Sporting, from whom he went on to be selected for Argentina at the junior levels.

As part of an arrangement between Casale Rugby and Benetton Rugby, Nemer arrived in Italy in January. This enabled him to train with both teams and compete in Italy’s Serie A competition. He did so prior to the suspension of the 2019-2020 season due to the Covid-19 pandemic.

Nemer became the fourth Argentine player officially on the Benetton roster for the 2021 season.