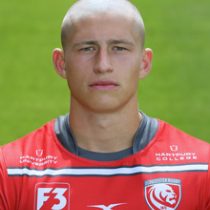 Bristol-born Jack Reeves is not only a talented centre he is also a talented judoka, winning four British medals before focussing on rugby at Hartpury College..

Jack is not the only multi-talented sportsman in his family and has taken plenty of inspiration from his father, Ross, who turned out for Bristol between 1990-93 but also played Canadian football for Winnipeg Blue Bombers in the 1990s and then represented the Canadian bobsleigh team. Jack originally took up rugby at five years old and was coached by his father at Dursley RFC before joining Gloucester’s academy in 2014.

He cites his proudest moment as helping Hartpury College to the AASE Championship title in December 2017, overcoming Gosforth Academy 66-14 at Allianz Park.