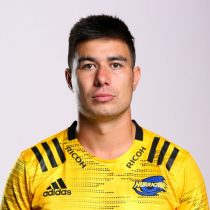 Garden-Bachop played rugby at Scots College in the city. He is the son of former All Black Stephen Bachop and former Black Fern Sue Garden-Bachop.[

A live-wire first five Jackson Garden-Bachop was a member of the Wellington high-performance schools' squad and was later named in the Hurricanes under-18 training camp XV.

He made his provincial debut for Wellington as a teenager during the 2013 ITM Cup.

Garden-Bachop represented New Zealand at schoolboy level in 2012 and under-20 level in 2014.

In November 2016, Jackson signed a two-year deal to be part of the Melbourne Rebels Super Rugby squad for 2017.

He returned to New Zealand after the Super Rugby season and appeared all of Wellington’s 2017 Mitre 10 Cup matches scoring 142 points as Wellington secured promotion to the Premiership for the 2018 Mitre 10 Cup.

After an excellent season with the Wellington Lions that saw him named as the team’s player of the year, Garden-Bachop signed a two-year deal with the Hurricanes.

He was also named in the Maori All Blacks squad for the end of year tour and made his debut against Canada.

His first season with the Hurricanes saw him make four appearances, with his debut against Jaguares.