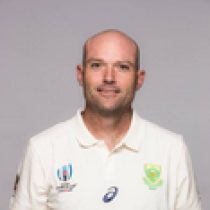 Over a seven year period he held defence roles with Western Province, Stormers, Junior Springboks, South African Schools and the Springboks and was High Performance Manager with the SARU before joining Munster at the beginning of the 2016/17 season.

Nienaber initially worked as a physiotherapist for Erasmus’ Cheetahs side in the late 1990s but Erasmus pushed him into a strength and conditioning role before then convincing Nienaber that he had the coaching ability to lead defences.

Nienaber has signed a three-year contract with Munster.

In June 2017 SARU announced that Nienaber would return to South Africa with Rassie Erasmus at the end of December.

The former physiotherapist, headed up the Springboks' defence helping the senior side win the Rugby Championship and Rugby World Cup in 2019.

Following the completion of the Rugby World Cup, Rassie Erasmus moved into the Director of Rugby of South African Rugby role with Nienaber named as his successor taking over as the side's new head coach.

He takes over the head coach role of the Springboks, his first such role in his coaching career.