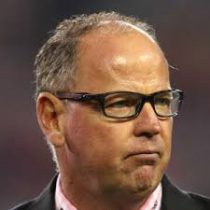 Well known and well respected, Jake White unlikely many professional coaches did not play rugby professional or even for his first XV at school. White attended Jeppe Boys High school in Johannesburg and would later have a field named after him at the school.

Having finished his schooling White ventured into coaching, he began his coaching career as a high school rugby coach at Parktown Boys' High School before returning to his old school as a teacher and as coach of the school's First XV.

White's success with the school team resulted in him being appointed as provincial schools coach. He coached various under-19 and under-21 sides before assisting Springbok squad preparations by doing video analysis for them.

In 1995, he joined Transvaal (now the Lions) as the Director of Coaching at the union and was later the fitness coach and Technical advisor with the Lions' Super Rugby side. From 1997 to 1999 he was a technical advisor to Nick Mallet, being part of the 17 Test winning record by the Springboks.

In 1999 he was the assistant coach to the U-21 Springboks, coached by Eric Sauls and captained by John Smit, the man who would lead White's Springboks to glory 8 years later.

White was named as the new Springbok head coach in 2004 taking over from the controversial Rudolph Straeuli. White's first move was to install John Smit as the side's captain. The decision drew a substantial amount of criticism but White's impact was immediate as his Springbok coaching career started with a 2–0 series win over Ireland, followed by wins over Wales and a combined Pacific Islanders team in the 2004 June rugby union tests.

He then proceeded to coach South Africa to their first Tri-Nations trophy since 1998 and soon after the 2004 Tri-Nations victory, White's contract was extended to after the 2007 Rugby World Cup.

The Springbok resurgence was recognised with a sweep of the major IRB Awards as the Boks were named Team of the Year, White Coach of the Year, and flanker Schalk Burger Player of the Year.

The following year, White's Springboks finished the Tri-Nations in second place before White's side struggled in 2006 winning just 5 of their 12 tests.

2007 saw the Springboks beat England in back-to-back test matches while also beating Samoa before the Tri-Nations.

South Africa won all of their pool matches beating England 0–36 while escaping defeat to Tonga beating them 36–20. The Boks would beat Fiji in the quarter-finals, Argentina in the semis and England 6–15 in the final to lift the William Webb Ellis cup as White completed his journey with the Springboks taking them from 6th in the World Rankings to World Champions.

Following the World Cup, White was named as the IRB Coach of the Year picking up the award for a second time and had become the most successful South African team at home in the history of Springbok rugby, undefeated at home in 11 tests (they would extend this streak to 13).

After leading the Springboks to the Rugby World Cup glory Jake White took on a role working at the International Rugby Board assisting with their technical committee. He performed this role from 2008 to 2012 before he took over the head coaching role at the Brumbies. He took the side from 13th on the ladder in 2011 to second in 2013.

In 2013 Brumbies beat British and Irish Lions 14-12 during their Australian tour, which was the first Lions loss to a non-international side since 2005, when they lost to Māori All Blacks, though they had a draw with Emerging Springboks in 2009.

After a successful stint with the Brumbies, White was believed to be a strong contender for the Wallabies head coaching role when Robbie Deans resigned. However, he beaten to the role by fellow Super Rugby coach Ewen McKenzie. Surprisingly, after just two mounts after leading the Brumbies to second in the Super Rugby, White resigned from his post at the Brumbies explaining he wanted to return home to South Africa

On 7 October 2013, White was appointed director of rugby at the Sharks, replacing Brendan Venter. White helped the Sharks reach the Super Rugby semi-finals in 2014 before resigned as Director of Rugby, to pursue an international role ahead of the 2015 Rugby World Cup. On 13 October 2014, White joined Tonga as a member of the backroom staff, and acted as a technical advisor.

White spent 3 years at helm of Montpellier and in March 2017, he signed a deal with Japanese club Toyota Verblitz to coach the club for the 2017/18 season. In March 2020 he signed as Bulls Director of Rugby until the 2023 World Cup.