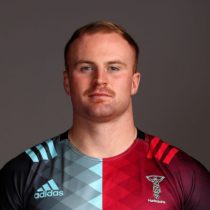 James Chisholm is the youngest brother of Harlequins team mate Ross. He joined the Harlequins Academy in July 2013 and made his senior debut in the same year against Exeter Chiefs in the LV Cup. The back-row made his starting debut a week later, and played the full 80 minutes to triumph over Sale Sharks.

The Haywards Heath-born Number 8 joined the club from Brighton College and captained England Under 18s to victory in the FIRA European tournament. The former Sussex Under 18 high jump champion represented England Under 20s during the 2014 Six Nations and won the Junior World Championship later that year.

In 2015, James helped the U20s to the Six Nations title, before being named as the World Rugby U20 Championship Player of the Year.

2017/18 was similarly prolific for the dynamic back rower, again winning the DHL Player of the Season award and also being awarded the captaincy for Quins' Anglo-Welsh Cup campaign - a responsibility that he took on in 2019/20 in the absence of the Club's Co-Captains, Chris Robshaw and recently retired James Horwill.

Off the pitch, James has a coaching role at Farnham RFC alongside fellow quin Max Crumpton.