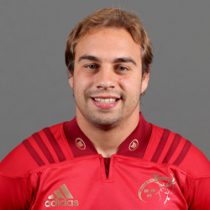 Hart, a youngster devoted to the game of rugby, came up the ranks in Belvedere College playing in various different positions across the backline - primarily at scrum-half.

With a Jonny Wilkinson-esque work rate, Hart developed his handling & kicking skills. A short stint with Clontarf & the underage Leinster setup, saw him travel to France in 2011, where in a very short space of time he graduated from the Grenoble 'espoir' team to a Senior contract, where he would play 58 games and score 274 points for the French club.

Hart, who holds a French passport, spent five seasons with the club before moving to Racing in the summer of 2016 on a three-year deal.

Along with previous Grenoble teammate Chris Farrell, Hart returned home, having both been identified by the Munster head coach Rassie Erasamus as Irish native players with huge potential for the future.

He heads into the 2018/19 Pro14 season having made14 appearances for Munster and scored 10 points.