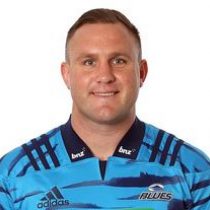 Born in Palmerston North and educated at King's College in Auckland, completing his education in 2004.

A natural leader, Parsons joined the Blues squad after being a member of the 2012 Wider Training Group.

The North Harbour captain is technically astute, mobile around the field and has excellent accuracy with his line-out throwing. He was selected for his All Blacks debut in 2014, in the November International against Scotland.

In 2015, he gave up his starting spot to the retiring Kevin Mealamu in his 50th appearance for the Blues. Parsons was selected as stand-in captain for the Blues match against the Highlanders in the opening game of the 2016 Super Rugby championship.

He came into 2016 All Black Rugby Championship squad as injury cover and earned his 2nd caps.

The uncompromising and thoroughly professional hooker, Parsons signed a one-year extension with the Blues and looked to reach 100 Super Rugby caps having made 89 by the end of the 2018 Super Rugby season.

A centurion for the Blues and North Harbour along with two tests for the All Blacks, Parsons announced his retirement in January 2021 stating that he is retiring on medical advice, after being out of the game for several months from a head injury.

The former captain of the Blues finishes as the fourth highest capped Blues player (115 games) behind Keven Mealaumu, Jerome Kaino and Tony Woodcock.

He debuted for the Super Rugby side back in 2012 against the Highlanders and also racked up 106 caps for North Harbour.