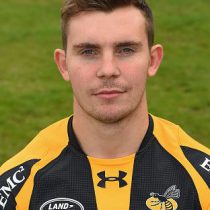 Even though he was born in Croydon, Stevenson has represented Scotland at u20 level. Standing at 6ft 1, he is quite an imposing player for his position

Stevenson made 65 appearances and scored 14 tries for London Scottish after breaking into the first team during the 2011/12.
He was a crucial part of the London Scottish squad that made it to the Championship playoffs for the first time in 2014/15.

He then joined Wasps for the 2015/16 season and due to limited opportunities, he returned to the Athletic Ground a year later.
In the 2016/17 season, he featured on 16 occasions, crossing the try-line three times against Rotherham Titans, Jersey Reds and Richmond.

Stevenson suffered from multiple knee injuries and in April 2017 Stevenson announced that he would retire from professional at the age of 24, following the advice of a knee specialist.