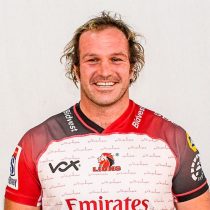 The experienced tighthead, who is a veteran of two World Cup campaigns, has partnered his brother Bismarck in the front row for the Sharks and Springboks for many years.

The hard-working prop, who is also a qualified doctor, has become a reliable performer at scrum-time and has dominated the No.3 Bok jersey in recent years.

He played for the Cheetahs in Super Rugby until 2007, when he joined Durban-based side the Sharks, where he played until 2015.

A veteran of 70 test caps, du Plessis won the World Cup in 2007 with the Springboks and enjoyed a stellar career where he and his younger brother Bismarck set the record for the most tests starts for brothers for South Africa.

After featuring in his third World Cup in 2015, Jannie and brother Bismarck signed a deal to join Montpellier having represented the Sharks for eight years and forming one of the best front rows for the Springboks and Sharks.

In April 2018 he signed a new one year deal with Montpellier for the 2018/19 season before extending that deal short-term as World Cup cover.

In November, it was confirmed that du Plessis had signed a deal to join the Lions for Super Rugby 2020, his final year as a professional player,