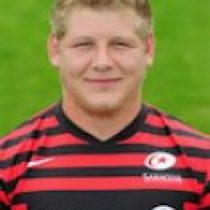 The young South African-born prop is yet another talent being groomed at Saracens. A serious knee injured limited his opportunities in the 2011/12 season, although he made a few appearances on loan at Hertfirdshire in the County Championships. Saunders has represented England Counties in the past and will be eager to get back to full fitness this season and battle to a place in the first team.

Saunders has been a member of the squad at current Aviva Premiership and European Champions Saracens for the past eight seasons.

Born in Amanzimtoti near Durban and part of the set-up at Johannesburg-based Super Rugby side the Lions early in his career, the 26-year-old has featured in the Premiership, Anglo-Welsh Cup and Heineken Cup for Sarries, as well as loan spells in the Greene King IPA Championship with Rotherham Titans, Bedford Blues and Plymouth Albion.

Saunders signed with the Jersey Reds for the 2017/18 season.

After seventeen appearances for Jersey Reds, he signed for London Scottish for the 2018-19 season.