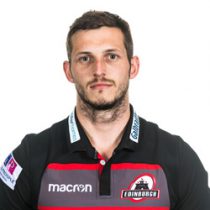 Tovey spent two years with the Dragons Academy and made his professional debut against the Ospreys in April 2008. In May 2010 he was voted Young Player of the Year at the Welsh professional players awards.

He had a brief spell at Cardiff Blues in season 2012/13 before returning to Dragons where he amassed 163 caps and 951 points.

Tovey joined Edinburgh in March 2016, from fellow Guinness PRO12 side Newport Gwent Dragons, initially on loan until the end of the season, prior to agreeing on a two-season deal.

In October 2018, Dragons signed Tovey initially on permit from Cross Keys RFC for a third stint with the Rodney Parade based region.

The vastly experienced fly-half was released by the Dragons at the end of the 2018/19 season, having established himself as the region’s record points scorer with 1,009 points in 178 games.

He signed with Cardiff Blues ahead of the 2019/20 season penning a two-year deal.

Young Welsh Player of the Year 2010