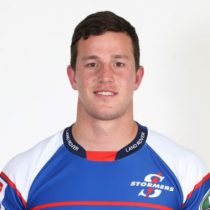 2014 saw a terrible neck injury nearly end his career playing for the WP U21's but miraculously he not only recovered but returned to the game.

A member of the 2012 & 2013 SA Schools side and the SA U20 side this Paarl Gymnasium product will undoubtedly make it much further.

Schickerling took his Super Rugby cap tally to 17 in 2017 and helped Western Province to yet another Currie Cup title.

Another injury setback saw Schickerling make just 4 appearances for the Stormers for 2018 season.

He starred in the Currie Cup and earned a call up to the Springbok squad for the 2018 November Tests.

The following year he was named in the South Africa Green side before signing for Top League side Kobelco Steelers in September 2021.