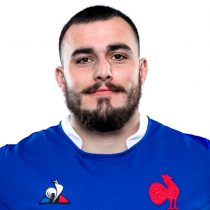 A gifted front-rower who is another member of France's golden generation which won back-to-back U20 World Championship titles in 2018 and 2019.

Gros made 14 appearances for the French U20 side scoring three tries.

Having progressed through the Toulon Academy ranks, Gros became a regular in the senior squad.

Following 25 appearances in the Top 14 for the French club, he earned a spot as an uncapped player in France's 2020 Six Nations squad.