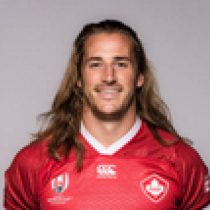 Jeff Hassler was born in Canada hailing from Alberta where he attended Holy Trinity Academy before moving to east to play football for the Saskatchewan Huskies.

Hassler plays on the wing but is also able to cover in the centre. A rapidly improved wing who has taken the PRO12 by storm since signing for the Ospreys, Hassler earned a place in the 2013/14 team of the season in that competition after scoring seven tries and was also impressive in the 2014/15 before knee surgery curtailed his campaign in December.

Hassler is a hard-running, no nonsense wide man who benefitted from experience in Sevens and has developed into a top class winger. Having successfully recovered from injury, Hassler was selected in the Canada squad for the 2015 World Cup.

The Canadian flyer has played 55 times for the Ospreys scoring 18 tries at the start of the 2017-18 season.

He left the club at the end of the season signing for the Seattle Seawolves, helping them to back-to-back Major Rugby League titles.

He has been included in Canada's Nations Cup squad, he has 21 test caps scoring 5 tries and will look to feature in his second Rugby World Cup.