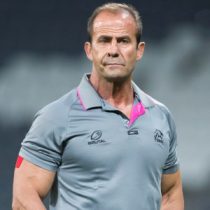 Jimmy Stonehouse was born in Krugersdorp, Gauteng in 1964 and went on to represent South Eastern Transvaal, now Pumas, as a hooker. Stonehouse found success as a coach at Hoërskool Ermelo, while still representing the Pumas. He would go on to coach the Pumas u/18 Craven Week sides from 1990-1992 and again from 1994-1997.

In 1998 he joined Hoerskool Waterkloof as their Director of Rugby and led them to a Blue Bulls high school championship in 2003, the first time in 12 years. He was chosen to coach the Blue Bulls u/18 Craven Week sides in 2003 and 2004.

During his time at Waterkloof and the Blue Bulls he coached the Russian under 19 team and the Russia Sevens sides with great success, before being appointed the Senior Head coach of Russia but returned to South Africa prematurely due to family reasons.

In 2004, he was joined the Harlequins side in Pretoria and guided them to the Semi-Finals of the Blue Bulls Carlton League in 2006, first time in 22 years.

In 2005/06 he coached the Blue Bulls Woman's Seven side and Woman's national side that was victorious in the Woman's National Sevens Africa tournament in Uganda.

He was once again appointed the role of the Blue Bulls Craven Week coach in 2007 and 2008.

In 2008, Stonehouse was appointed as the Head Coach of the Pumas, he would go on to build a strong Pumas side that was difficult to beat and often surprised many of the Currie Cup heavyweights.

His reign at the Pumas would last until 2015, when he was approached to join Japanese side Toshiba Brave Lupus, he would later sign a contract extension at Lupus in 2017.

Towards the end of 2018, Stonehouse returned to South Africa to coach the Pumas.