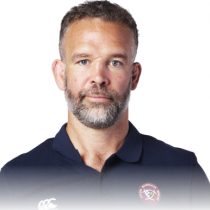 Worsley was born in London and educated at Hitchin Boys' School and Brunel University. He joined London Wasps at the age of 16 from Welwyn RFC and became the youngest player to represent England U21s, after being a member of the England Schools 18 Group Grand Slam team in 1994–95.


Worsley built a formible reputation for his tough tackling and his ability to play across the back three which earned him a place in the England squad for the 1999 Rugby World Cup squad and made his test debut against Tonga.He then came on as a replacement against both Scotland and Italy during England's Six Nations Championship matches in 2000.

He continued in the back row for England's 2001 Challenge matches, when he turned in two outstanding performances against Australia and South Africa. He also replaced Richard Hill in both of England's 2003 tour matches against New Zealand and Australia.


Worsley was a member of England's victorious Rugby World Cup squad in 2003, coming on during the pool match against South Africa and starting against both Samoa and Uruguay.

He was a member of the London Wasps side that won both the Zurich Premiership final and the Heineken European Cup Final in 2004 and he played well on the summer tour to New Zealand and Australia. Worsley participated in the 2007 Rugby World Cup and made a "try-saving tap-tackle" which prevented Vincent Clerc of France from scoring a probable match-winning try late in the semi-final (13 October).

He played on the Lions 2009 tour of South Africa. In 2011 it was announced that Worsley had been cut from England's training squad due to injury and would probably miss the 2011 Rugby World Cup. Later that year he announced that he would retire from all forms of the game due to a neck injury.


He represented England 78 times, earned one cap for the British and Irish Lions and played 275 games for Wasps.


He has since gone on to start his coaching career and worked as an assistant coach to Rory Teague at French club Bordeaux and took over as the caretaker head coach when Teague vacated the role.