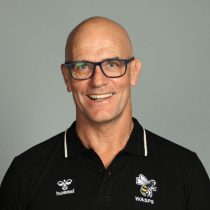 Mitchell established himself in the Waikato NPC squad captaining the side the side between 1985 & 1995. Although Mitchell never played for the All Blacks in a test match, he did captain the side in 6 uncapped matches in 1993.

The former loose forward, who played over 130 times for Waikato moved into coaching following his retirement. He served as a player/coach for Fraser Tech for two years before joining Ireland's coaching staff in 1996.

Mitchell spent just one year with Ireland before taking a role with Sale Sharks, where he eventually took over as the head coach.

He returned to New Zealand in 2001 taking up the head coach role Waikato, the side he captained, while also working with the Chiefs before named as the All Blacks new head coach that same year.

Mitchell coached New Zealand to the Rugby World Cup semifinal in 2003 and finished his time as All Blacks coach with a winning percentage over 80%.

Following the World Cup Mitchell took over as Waikato's head coach once again before becoming the first ever New Zealander to coach an Australia Super Rugby franchise when he took over the Western Force in 2006.

A stint with the Lions in South Africa followed after he vacated the Western Force role before he returned to England as Sale Sharks' director of rugby.

He spent just one year at Sale before returning to South Africa to coach UKZN for 2013.

In January 2016, USA Rugby announced Mitchell as the new head coach of the USA Eagles and a year later he led USA to their first ever Americas Rugby Championship title.

Mitchell was appointed as the Bulls director of rugby in 2017 but led the side in just one season of Super Rugby before he joined Eddie Jones' England coaching staff in September 2018 on a short term deal but signed a long term contract in the middle of 2019 putting him in pole position to take over the Head Coach role after Eddie Jones. Later that year he helped England reach the Rugby World Cup Final.

In February 2021, he signed a new deal with England until the end of the 2023 Rugby World Cup.