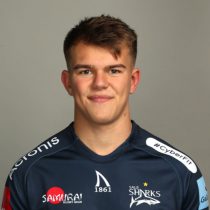 Born in Leeds, Joe has been involved in the Yorkshire Carnegie academy set up since 2016 and had always impressed when playing against the Sale academy.

Carpenter is an elusive runner that possess exceptional pace and is widley regarded as one of the most exciting academy prospects in England.

He has played age grade rugby for England alongside a number of Sharks academy crop including Tom Curtis, Tom Roebuck and Raffi Quirke.

In November 2019, he signed a deal with Sale Sharks.