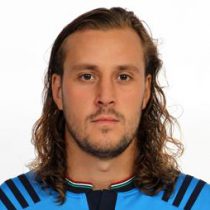 Born in Australia and growing up in Italy, Furno started his career with Viadana. He then moved to Aironi in the Pro 12, before leaving again to RC Narbonne in the French D2. After a number of years in Italian domestic rugby, Furno moved to Biarritz in 2013, and Newcastle in 2014. He made his international debut for Italy against Scotland in the Autumn of 2011.

The 6’7" giant is a dominant lock and always a prominent presence in the line out. Furno has been an ever present in the Newcastle side since his move, and represented Italy at the 2015 Rugby World Cup.

2016 saw the lock sign for Pro12 outfit Zebre before receiving a call-up to the Italy squad for the 2017 Six Nations tournament.
Furno has played 14 Six Nations matches scoring 10 points.