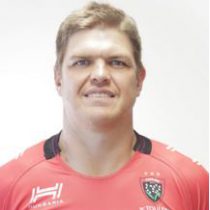 Smith made his international debut for South Africa on 7 June 2003 as a reserve in the 29-25 victory over Scotland at Kings Park Stadium in Durban. He was also named in the Springboks' team for the second Scottish Test the following week. He then played at number 8 during the 2003 Tri Nations Series against Australia and the All Blacks.

Smith was included in the Springboks squad for the 2003 Rugby World Cup in Australia. He played in four matches at the World Cup and scored a try in the match against Manu Samoa. Although he only played the one Test for South Africa during 2004 - against Wales at Millennium Stadium in Cardiff in November, he was capped 10 times for the Springboks the following season.

The Cheetahs gained entrance into the Super 14, and competed in the 2006 season. Smith captained the side, which ended up doing remarkably well for a new team, and the Cheetahs finished above the other new team, the Western Force, as well as three other Super 14 teams.

He played in the 2006 mid-year rugby tests wins over Scotland, as well as the loss against France in South Africa, then being named in the Springboks' 2006 Tri Nations Series squad. On 25 February 2011, in a Super Rugby match against the Bulls in Bloemfontein, Smith tore his Achilles tendon, which caused him to miss the rest of the 2011 Super Rugby season, as well as the Tri Nations and the 2011 Rugby World Cup.

In April 2012, Smith announced that he would be taking an indefinite break from rugby due to the ongoing battle with his Achilles injury. Despite making his long-awaited comeback for the Cheetahs playing against the Bulls in a pre-season game in February 2013, the results of a subsequent MRI scan forced Smith to announce his retirement from the game.

In 2013 Juan announced that he had been persuaded to join come out of retirement and join Toulon. It was a fairy tale for Juan as Toulon won the Heineken Cup and in 2014 they won the Top 14 league as well as the Heineken Cup once again.

In 2014, South Africa's coach included Smith in the Springboks Rugby Championship squad to face Argentina. In June 2016 he signed a year-long contract extension on his Toulon contract.

In June 2017 Smith played his final game for Toulon in the Top 14 final against Clermont. Later that month Smith announced that he would be joining Japanese side Toyota Verblitz ahead of the 2017/18 season.