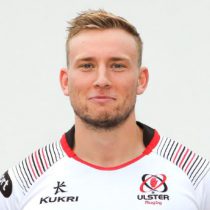 Born in England, Treadwell was a member of England’s U20 Six Nations’ Championship-winning team in 2015, and his lineout abilities are complemented by an exuberant running and ball-carrying game.

Treadwell qualifies to play for Ireland through his mother and represented the country at underage level, having earned four caps for the U18s in 2013, before switching allegiances at the next level of underage rugby.

The athletic second-row was a valued member of the Harlequins Academy, and he made five appearances for the distinguished Aviva Premiership side before he decided his long-term future was with Ulster.

In January 2016, he was signed by Ulster on a two-year contract. Treadwell has lined out for Ulster on 21 occasions this season and has shown promise in the engine room.

In May 2017, Treadwell was named on Ireland's summer tour squad to play USA & Japan. The Ulster lock won his first cap in the win over Japan.

The powerful lock played twice against Japan in June and added a further cap, against Fiji, on 18th November.

His lineout abilities are complemented by an exuberant running and ball-carrying game.

He has been one of the regular starters for his side in the 2019/202 season continuing with his fine form from the previous year.