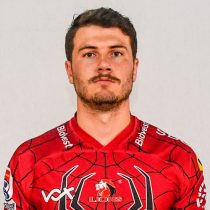 In 2017 he helped UJ to the Varsity Cup semi-final and was named in the Lions Currie Cup side.

He was then included in the Lions wider squad for the 2018 Super Rugby season and was called into squad following the injury to captain Warren Whiteley.

He was named in the starting line up to face the Sunwolves for his Super Rugby debut.